How Healthy is Your Codebase? Introducing Code Health and Biomarkers for Software

We at Empear make heavy use of CodeScene ourselves.

We use the tool as part of our services. Over the past years we have analyzed hundreds of different codebases, and there are some patterns known to correlate with increased maintenance costs that we have seen repeated over and over again. Thus, we taught the CodeScene tool how to auto-detect those patterns.

We call the feature code biomarkers. We chose that name because we wanted to avoid terms like “quality” or “maintenance effort” since they suggest an absolute truth; instead, we wanted a concept that doesn’t judge, but acts like a friendly, unbiased, and skilled team member.

In medicine, a biomarker is a measure that might indicate a particular disease or physiological state of an organism. CodeScene’s biomarkers do the same for code. Combined with our biomarker trend measures, you get a high-level summary of the state of your hotspots and the direction your code is moving in; does it get better or worse over time?

CodeScene's Code Biomarkers show the status of your hotspots at a glance, here an example from React.

CodeScene calculates code health using a combination of both properties of the code as well as organizational factors. The factors are chosen based on research, and known to correlate with increased maintenance costs and the risk for defects. We then weight, normalize, and score the findings according to our baseline data to come up with the code health metric.

Of course, in a larger system, the interesting unit of measure is not the file level but the architectural level. CodeScene supports this by scaling its code health metric to architectural components, such as layers, features, or microservices. That way, you can monitor the code health of each microservice just like you would supervise their run-time characteristics. Here’s an example from the Spinnaker codebase:

Monitor the code health trends of your microservices.

Should an architectural component or service decline in health, then you can always click on the corresponding element and get a detailed breakdown of which files that are responsible for the decline as well as insights into the reasons. Just click on a hotspot, and CodeScene presents the identified biomarkers.

Now, once code has declined in health, it usually requires a significant effort to bring it back on track. That’s why it’s important to catch degradations early. For that purpose, CodeScene comes with integration points into build pipelines and pull requests. That way, you can auto-supervise the code health of your hotspots to ensure that no reckless technical debt is taken on. The next figure shows an example via GitHub’s checks API, a completely automated integration via CodeScene:

Another interesting visualization point is via your codebases landing page, e.g. your README on GitHub/GitLab/BitBucket. By embedding CodeScene’s status badges, you provide visibility into a core metric for all developers:

Metrics must be Actionable

The biomarkers and code health concepts are built on baseline data from thousands of codebases. To make the resulting information actionable, the code health concept is built on top of CodeScene’s other metrics. That means we only score the prioritized parts of the codebase, the parts that are most likely to impact development and maintenance costs. 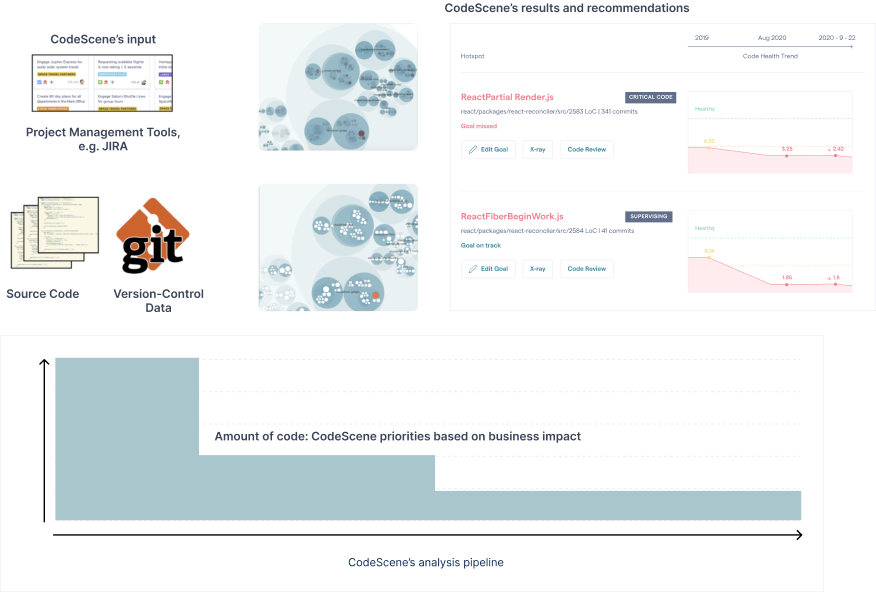 Biomarkers are built on top of CodeScene's prioritized hotspots to make the resulting information actionable.

All together, the code health concept supports an organization by helping:

Calculate the Code Health of Your own Code

The code health feature is available in both CodeScene on-prem and the CodeScene SaaS. Contact us if you want to know more and get started with CodeScene – your code is worth it.